If you find something interesting or want to get in touch, please leave a comment or contact me using the above contact form. I really enjoy hearing from diary readers. This is a photo of John Alcock's son Harold. It was taken in 1918 at the Red Cross home of Booloominbah in Armidale, northern New South Wales after Harold was injured in Turkey when a camel fell on him. Ironically, this saved him from crossfire.

Thanks to Mick Reed for the photo. The reference number is University of New England and Regional Archives (UNERA) A1473.2.109.
2 comments: 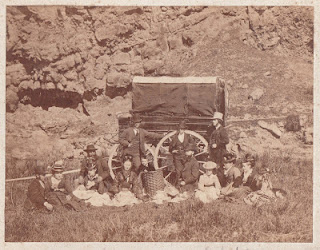 I was thrilled when I was contacted by Tony Rackstraw from Christchurch, New Zealand, who has put a couple of photos from 1878 ﻿on his blog. In the above photo, Alberta Eccles is sitting second from left and Samuel Eccles is standing with the light-coloured top hat. 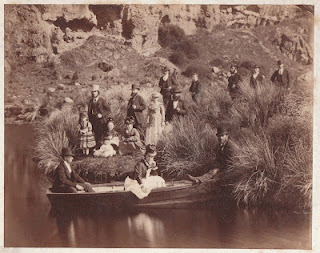 Samuel Eccles can also be seen in the above photo.﻿
Thanks a lot to Tony for those photos and for letting me put the photos here on my blog. You can read more here: http://canterburyphotography.blogspot.co.nz/2012/03/blog-post.html
No comments:

Thanks to this blog, I have managed to get in touch with distant relatives in Australia and New Zealand and they have sent me a photo of John's oldest daughter Mary with her husband (Samuel Roseveare) and 2 oldest children. This photo was taken around 1912. Thanks a lot to Lesley and Marney for that.
No comments:

When I get comments on the entries or messages, it makes typing in the diary all worthwhile. So thanks to everyone who has got in touch.

One of the most interesting that I received was from Paula Mott last January. She sent me a letter that John had sent from New Zealand to his brother Ralph back in the UK. John was enjoying his bachelor life there, messing about on the river with his friends. 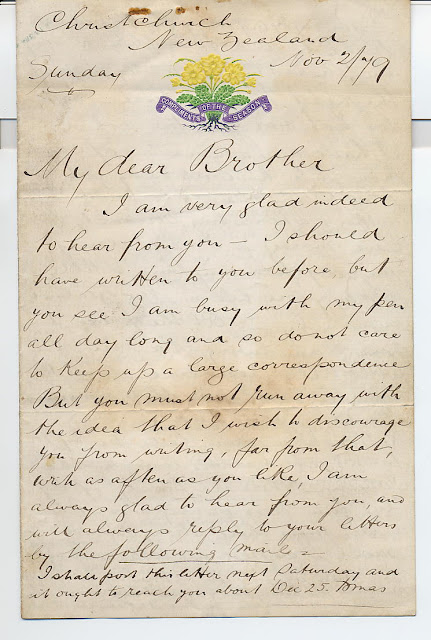 John had 9 child and they ended up in various parts of the Commonwealth:

John Alcock's obituary was printed in the Sentinel in 1926:

THE LATE MR. JOHN ALCOCK OF STOKE
The death occurred recently, at the age of 74, of Mr. John Alcock, retired Architect and Surveyor, at his residence, Maycroft Woodhouse Street, Stoke-on-Trent. He was a son of the late William Alcock, estate agent and auctioneer, and brother of the late William Alcock, builder of Cheadle, Staffs. He leaves a widow and nine children. His loss is greatly felt by all his friends, by whom he was held in great respect and esteem.

As a youth, he went to New Zealand, and there he met his wife. While in New Zealand, three daughters were born to them, two of whom are now residents of New Zealand, and the third, Mrs. Howard Rigby, resides in Alsager; the remaining six children were born after their return to England. The eldest son is in Canada and two sons are in Australia.

In his younger days, he did a good deal of lecturing, frequently showing lantern slides, and giving details and information of the charms and possibilities of life in the Colonies. He was a great enthusiast in this direction and conducted Men's Bible Classes at various times.

Mr. Alcock was well-known for his walking activities and there are very few of the beauty spots of England with which he was not familiar. He made a special study of the architecture of cathderals and churches. His love of walking gave him a knowledge of the chief roads and bye-ways of England, and he was always ready and willing to give interesting and graphic accounts of his many travels, both home and abroad.

He was very clever at designing patents, and brought out several good ones. He was
instrumental in the aerodrome being brought to Ternhill, Market Drayton, during the
War, and contributed several valuable patents to the War Office.

He was of a retiring nature, and his principal hobby was composing poetry and prose. Under the nom-de-plume of Horton Yardley, he wrote some excellent articles. A few days before he died, he wrote the following: "May ye so continue in the days to come, for time is fleeting, and waits for no man, and now when my few remaining days are done, I shall lay down my pen and seek that repose and rest that God promises in days of old in those that love him and keep his Commandments".

Mr. and Mrs. Alcock had spent a very happy life together, and were looking forward to their golden wedding, having been married 46 years and not having had a death in the family during that period.

Notes:
1) Horton Yardley is a combination of John's mother's birthplace (Horton) and his mother's maiden name (Yardley) ﻿
No comments:

Here's what I know of what happened to John after 1888:

1890 - son Frederick born in Cheadle. John was an auctioneer, living in Bank Street.

1896 - Kelly's directory lists him as a certified bailiff, Queen Street.

1915 - son Walter went to Canada and John was living at 23 Woodhouse Street, Stoke.

Out all day, collecting brewery accounts and forwarding balance sheet.

Out collecting accounts for brewery and in park seeing men's work, fence etc.

Morning - Out for brewery and also in park looking after the brothers Titterton who are doing gutters and fences.

We had a tremendous wash of water last night. Regular flood on?
2 comments: